It’s not just Santa’s little elves that are hard at work at Christmas time.  It’s architects too!  Founded in 2006 by David M. Schwarz Architects, GINGERTOWN™ is a one-of-a-kind holiday initiative that brings together the leading architects, engineers, and contractors in the DC area with building enthusiasts – young and old – to create a town made completely of ginger bread.  And, it’s all for a good cause.

Each year, David M. Schwarz Architects creates a new master plan for the magical town of ginger.  Like all great master plans, the GINGERTOWN™ plan has the sense and rhythm of a traditional planned city with communal and civic-minded centers, green spaces and a strong pedestrian culture.  But unlike like other towns, the streets of GINGERTOWN™ are paved in Reeses Pieces and Rice Krispies, and typically have lamp posts constructed of candy canes.

GINGERTOWN’s expansive lots allow individual designers and teams to be highly creative as they build essential town structures like city hall, the concert hall, the library, and, of course, the toy store. Like many of their steel & concrete contemporaries, GINGERTOWN™ buildings often feature intricate structural support systems, functional windows & lights. They are even subject to a town building code! The confectionary creations are detailed with chocolate, frosting, sprinkles, jelly beans and dozens of other edible (and sugary) building materials.

The hand crafted structures are then donated and put on display at local hospitals, health care facilities and community support organizations to help spread the message of joy and hope during the holidays.

Since the event’s 2006 inaugural year in the elevator lobby of David M. Schwarz Architects’ Washington, DC office, GINGERTOWN™ has grown evolved into a cross-country affair. In addition to the original DC event, GINGERTOWN™ is also held in Dallas, TX, Nashville, TN and Atlanta, GA.

If you would like more information or wish to participate in the GINGERTOWN™ initiative this year please send us an email at gingertown@dmsas.com 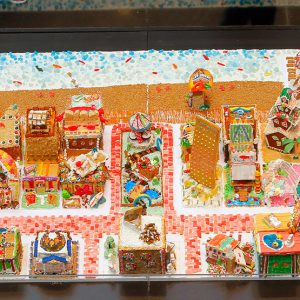 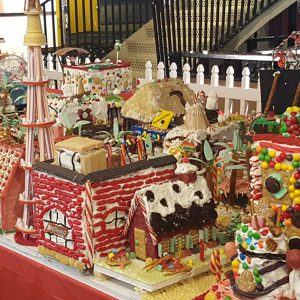 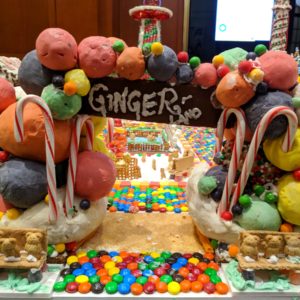